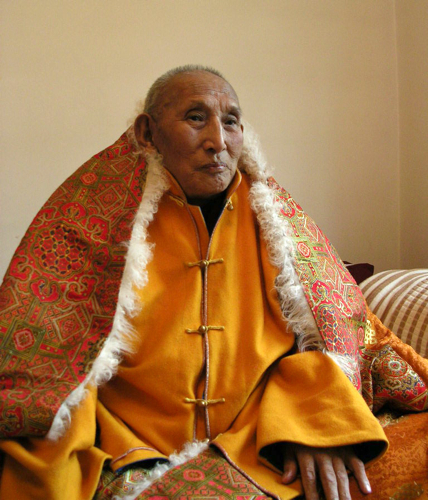 Tsara Dharmakirti Rinpoche was born in 1916 on the 10th day of the 6th month of the Tibetan calendar in Kham Minyak, Tibet. From the time of his conception, many miraculous signs appeared around the tent where his family lived. One day, a large white khata (offering scarf) fell from the sky, and the water inside the jugs that were kept in the tent turned to milk. On the day of Rinpoche’s birth, the sky filled with rainbows and seven dragons ascended into the sky

From the time that Rinpoche was just a little boy, he had an unusual capacity for arousing Bodhichitta. Even at the age of one or two, Rinpoche often assumed the posture and ritual gestures of a great Lama. When he was seven years old, he was recognized as a tulku and given the Tibetan name Chokyi Drakpa (or Tsara Dharmakirti in Sanskrit) by Khenpo Apal of Kham Minyak.

As soon as he began his studies, his unusually sharp intelligence was apparent. He easily mastered any course of study, and when he was just thirteen years old, he gave his mother the teachings on Patrul Rinpoche’s Words of my Perfect Teacher that he had just been taught by Do Rinpoche. 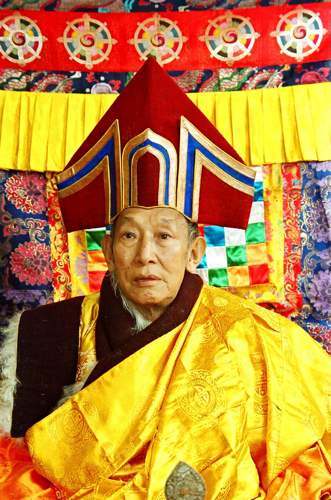 At age eighteen, Rinpoche traveled to both Kham Dzogchen and Shechen, where he studied at the two largest shedras (Buddhist universities) in the Nyingmapa sect of Buddhism. There he received complete teachings on the Five Treatises of Buddhist Philosophy, the Five Works of Maitreya, the Mahayana, the sutra teachings from all four schools of Tibetan Buddhism, as well as the complete instructions on the Mahayoga Tantra from Dzogchen Khenpo Thupten Nyendrak, Khenpo Ngagwang Norbu, Khenpo Pema Tsawang, Khenpo Sonam Wanggyal, and Khenpo Yeshe Dargye. As a result of his studies, he received the degree of Khenchen (great scholar) and became the heart student of all of these teachers.

In 1950, Rinpoche began traveling throughout Tibet giving teachings on Sutra and Tantra to thousands of students. In 1958, before the Chinese arrived in Amdo Trokyap, Rinpoche met with his students at the monastery there. To create the proper conditions for him to teach there again once the political situation became calm, Rinpoche wrote the seed syllable “hri” on the wall of a cave. The syllable naturally arose out the rock as a sign that the proper conditions had been made.

However, after the terrible political situation that arose in Tibet in 1959, Rinpoche was unable to continue teaching the Dharma. Rinpoche was imprisoned for many years, where he used the conditions around him to meditate on the nature of samsara and practice the union of Dzogchen and Bodhichitta. One night, Rinpoche became deathly ill. However, that night he dreamed of Milarepa, who gave him a long-life empowerment. Rinpoche was completely well by morning! A few years later, when Rinpoche became deathly ill a second time, he was healed by a vision of his teacher Lama Ngawang Norbu after praying to him deeply from his heart.

While he was still in prison, Rinpoche had an auspicious vision of a pure realm where he met Green Tara. Upon seeing Green Tara, Rinpoche prayed with deep devotion and meditated on pure appearances, and suddenly a rolled piece of paper appeared in Green Tara’s hand. At first, the number seven appeared on the parchment, but as Rinpoche continued to pray, it revealed the words of a prophecy. The prophecy said that after 20 years, the Dharma would once again be able to be practiced in Tibet just as a tiny spark can be fanned into flames. The vision gave Rinpoche great courage and filled him with even stronger faith, and his practice of meditation became even more diligent as a result. 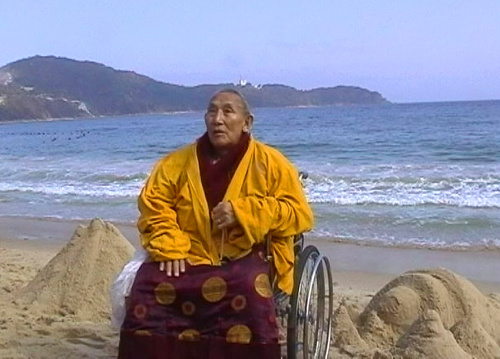 After Rinpoche was released from prison, he followed the outer conduct required by the new regime ruling Tibet. But secretly, Rinpoche gave teachings to special students that he met as well and also practiced meditation while he performed his daily activities and while he slept. Rinpoche also wrote many commentaries, including texts about Yeshe Tsogyal, Manjushri and Tara. During that time, he became Alak Zankar Rinpoche’s (tulku of Jigme Lingpa) teacher, and they spent hours discussing the Dharma and the state of their nation. Alak Zankar Rinpoche, who is well-known for his scholarship in the West, is often quoted as saying that there is no contemporary Lama as skilled at the meaning of Sutra and Tantra as Tsara Dharmakirti Rinpoche.

Nearly 20 years later, Green Tara’s prophecy came to pass as in 1980 Rinpoche was able to begin teaching the Dharma to small groups of people without having to fear political consequences. In the early 1980’s, he taught at several Tibetan universities until finally in 1987 he was able to build his own shedra and retreat center in Kham Minyak. From that time on, Rinpoche began to travel to monasteries and shedras throughout Tibet once again giving teachings and empowerments. As Rinpoche grew older, he was often visited in dreams and visions by the yidam deities Tara, Yeshe Tsogyal and Kharsapana. Notably, Rinpoche received the four empowerments from Yeshe Tsogyal directly in one of these visions.

Tsara Dharmakirti Rinpoche passed away at the age of 90, on the first day of Sakadawa, 2005. Rinpoche prophesied the month of his death 6 months prior, and passed away after giving teachings on the nature of birth and death. He spoke the seed syllable AH while seated in the vajra posture and then passed away.

Many miraculous signs manifested after Rinpoche’s death. After Rinpoche’s body was cremated, his bones became many-colored, glowing balls of precious medicine. The image of Tara arose from his skull cap, which did not burn in the fire. And, Rinpoche’s body expressed the sign called, “Tuk Jak Chen Sum” in Tibetan, or “heart, tongue and eyes.” This sign is attained by only the most superior of yogis, and was also attained by the omniscient Longchen Rabjam. May all beings find inspiration in this story of Rinpoche’s life and passing, and doing so, put the teachings into practice in their entirety!